When you get diagnosed with strep throat, you don’t go home to the internet and hope and pray you can find someone else who has been through what you’ve been through. You don’t worry about explaining to your family why you’re different than others. You don’t hope your work understands why you might need some time off. Everyone knows what strep throat is. When someone tells you their doctor said they have it, you know they’re heading home with an antibiotic for their full 24-hour period away from others to keep from spreading germs. You let them know you can handle things at the office while they’re at home getting some extra rest, eating lots of popsicles, and waiting for the magic medicine to get rid of the tickle and the white spots in the back of your throat.

When you get diagnosed with Ehlers-Danlos Syndrome, though, people don’t nod and understand immediately. They wait for you to explain it to them, which can be frustrating when you aren’t even quite sure yourself what exactly the condition is or means for your future. Without fail, someone will ask you in those first few months, “is it fatal? Are you going to make it?” When you explain to them that the condition itself isn’t fatal and the few symptoms that can be usually can be prevented with proper diagnosis, they breathe a sigh of relief. They look at you and tell you something like, “Thank God it’s not cancer.”

Let me also tell you something, THIS IS INSANE. Okay, but it’s also human. It’s human to wish other people could understand and have sympathy. It’s human to want people to feel an ounce of what you feel. It’s even human to become angry at other people for getting attention for their condition when you were almost screaming at your doctors for half your life before they finally believed something was wrong with you. You have to move past that. You have to be able to see the insanity and forgive yourself for those feelings. Tammy said at our event this weekend that self-forgiveness was an important step in being able to forgive others and she couldn’t be more right. If you can forgive yourself for resenting a cancer patient, you can forgive someone else for not understanding a condition whose name they heard the first time from your mouth only minutes before.

Here’s the other truth, though, you won’t really learn to live with this fully until you make room in your life for people living with it, too. Nobody else REALLY can get it and it isn’t fair for you to expect them to. I think of it this way, I work in an office. I work on a computer most of the day and with customers the other part of the day. If a carpenter asked me to empathize with him about his job, I couldn’t do it. I have no idea what it’s like to build a house. I can’t even begin to comprehend the nature of that profession–and it would be insane for him to think I could. I can talk to him. I can ask questions and do what I can to help him, but if he REALLY needs someone to help him through the hardest days in his job, he needs someone who has done it. He needs someone who DOES it. Having EDS isn’t all that different and it isn’t even that much more complicated.

Confession time: I SUCK at this. I get really angry a lot of the time at people for not understanding what’s happening to me. I can’t even tell you how often I’ve made snarky comments back at someone who has said something to me about using a handicap parking space when I’m “young and pretty and ‘fill in the blank with other not sick word’.” Now, I’m not saying people should do this to me, because they shouldn’t. I have a handicap placard from the state and parking in that space is my right. I need the space even more when I’m NOT using my cane or crutches because my body is working ten times harder without help–and I don’t need some judgmental person who doesn’t even know what EDS stands for telling me I’m not disabled enough to park there, BUT, I have an opportunity to prevent them from saying it to the next person. I have a chance to help another “young, pretty, whatever” disabled person not have to explain that she has a condition they haven’t heard of and walking hurts too much to park anywhere else. A few people mentioned this to me, so today, I worked on a small business card I can give people when this happens. I know I’m still going to be angry. I should be angry. It’s not right and it’s not fair. BUT, if I can be pleasant and simply hand them a card and tell them to have a nice day with a concise message on it explaining what EDS is and that not every disability looks like the symbol on the parking sign, I’ll probably leave that situation better than they do?

Now, when someone who didn’t understand said this to me, I got even angrier. This weekend, though, I was able to attend my first in-person support group with so many of the people I’ve met through this group. I know they’ve been there. I know they’ve seen doctors who didn’t see the condition. I know they’ve had people in their lives not understand. When one of them offered the suggestion, it seemed valid and reasonable because I knew they GOT it.

My EDS friends don’t replace my actual doctors. They can’t fix all my symptoms. They can take my call when I’m home from work and devastated because my body literally hurts so much I can’t sit at my own desk. They can tell me which doctor and where was the most help for them on a specific issue. They can laugh with me when I want to sit on the floor instead of a chair because my body likes it better–and when I say I want to sit there, they don’t ask ten more times. They can become my allies in a battle for answers and doctors and cures and empathy. They can become my refuge from the judgment of those who can never understand what it is to be in our situation–and help me not to judge them in return.

They will do that for you, too. I promise. If there is any ONE thing I have learned about EDS patients since my diagnosis, it is that their passion for helping others far exceeds any physical deficit they may have. Find them. Ask them. Make them your people. I promise you you’re not ACTUALLY alone no matter how much it feels that way. 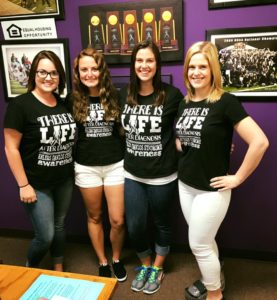 Plus, some people who don’t have EDS will still love and support you no matter what–like my amazing office staff in their EDS shirts.