A great friend I met through EDS Wisconsin asked me today if I’ve ever written about how it feels to never really “be able” to have an emergency. If you’re reading this and you don’t have EDS, you probably are wondering what we mean. For example, if we had a gaping head wound and were taken by ambulance to the local emergency room, of course we would be having an emergency—so how exactly can we say we are not “able” to have an emergency?

Here’s the thing about life with a condition like EDS. A normal day for us can often include symptoms severe enough, if we were healthy, someone from our family would probably put us in the backseat of a car surrounded by pillows and take us to the hospital for immediate attention. Just yesterday, as I was playing with my two dogs, who you both know I love as much as just about anything in the world, I dislocated a shoulder. I heard it before I felt it, because I have grown so accustomed to this particular joint moving. I went to my bathroom and moved my body around enough to put it as close to the right location as I could. I had already taken the dose of painkillers I was allowed to take for the afternoon with my NSAIDS, so aside from the bag of frozen mixed vegetables I grabbed from the freezer for some icing, there really was not anything else I was able to do. 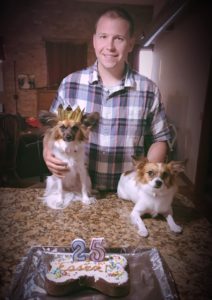 They’re skeptical of photos before cake, but they’re still worth a rough game of fetch.

Here is what would have happened had I gone to the emergency room. First, I would have had to explain to every person who came into the room that I have EDS, usually spelling it out for them. Last time I was in the emergency room, the DOCTOR (yes, a physician, an MD), said to me, “You have Maylers-Danyos Syndrome? That’s a new one. I’ve never heard of that.” I was in tremendous pain from what turned out to be a severe kidney infection (which took two more trips to the ER to get diagnosed, but I digress), so I thought perhaps in a state of pain, I hadn’t annunciated well. I annunciated and spelled out, “E-H-L-E-R-S…” and so on. He still had no idea what I was talking about. Next, they would have taken an x-ray of my shoulder. By this point, I would have relocated it well enough for it not to show on the x-ray. Because they’ve never heard of EDS, they would tell me it is unlikely I even dislocated it in the first place. They would offer me a higher dose of ibuprofen (yes, no actual painkillers) and advise me I may have pulled some muscles in the area. Usually at this point they say something like, “If you have this rare condition, you are probably seeing a specialist, so if you have a problem, follow up with them.” It has usually been hours by now, because I was triaged long after the screaming baby and the people with conditions they have heard of. My husband has drained his phone battery from playing games and trying to entertain me through the pain. Then, we’ll get another bill from another trip to another doctor who didn’t help me.

The last time I was in the ER multiple times, it took a routine visit to my pain management specialist for him to realize how truly sick I was. By this point, my fever was maintaining at 103-104 for more than  three weeks, but I had been given oral antibiotics with no culture for a kidney infection on my second trip after being told on my first visit that my extreme abdominal pain was caused by an ovarian cyst (that had not burst) smaller than the width of a dime. I was no longer in my hometown and in a system more equipped to handle my condition, but I only felt safe, because he called the ER. He walked them through both of the conditions I have. Aside from EDS, I have a rare metabolic bone disorder called Hypophosphatasia that leaves me incredibly susceptible to infection due to poor creation of white blood cells. Without an appropriate culture of my infection, it was extremely unlikely the antibiotics would be effective. I typically get 10-15 bacterial infections each year requiring antibiotics. My doctor told me if I did not agree to go to the ER, he would call the ambulance to take me because I was tachycardic from this infection and fever. I required significant amounts of fluids from dehydration and IV antibiotics, in addition to beginning a course of oral antibiotics to follow up on the infection. Without those specific instructions from a physician, it is likely I would have had the same experience. I am blessed to be articulate and skilled at advocating for myself and yet, I still do not have the same experiences in emergency rooms and urgent care as those without my conditions, because doctors simply are unprepared to handle someone as complex as me.

This post is for every EDS patient who has ever had a severe injury and decided a trip to the ER would be a waste of time and money for no reason but the lack of understanding. This post is a reminder why so many of us are fighting to educate physicians about EDS. This is for the parents sitting next to their children in those emergency rooms who do not yet have a diagnosis who end up separated from their babies, so someone can ask if they feel safe at home. It is better now than it was when I was a child and I believe the work we are doing today will mean it will be even better when your children are adults. This doesn’t make it fair or easy, but it does make the effort worth it.

You are not alone. We are all in this together.